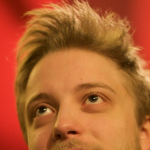 My name is Tobias.

In 2001, under the pseudonym "Spug", I created what is likely the first and only ever Vinnie's Tomb fanpage. At that point Reldni Productions had already gone underground, and I was never in contact with them.

I abandoned my fanpage nary half a year later, after it was clear that we would likely never hear from creator Troy Scott again, and also because at that point I was 15 years old and had better things to do with my hormones. Two years later, Reldni Productions' website disappeared from the face of the Internet, and my fanpage has been the only Reldni relic left for the past decade.

As a result, I have been contacted several times throughout the years[1] by Reldni fans, hounded for information about Troy Scott's whereabouts and the fate of Vinnie's Tomb Chapter Three. Although I have never claimed to be a Reldni historian, I have finally decided to gather what I know on this wiki, in the hope that it will live forever and be a haven for hungry fans googling for this long dead vestige of the Internet's youth.

Retrieved from "https://reldni.fandom.com/wiki/User:Tobiasvl?oldid=4089"
Community content is available under CC-BY-SA unless otherwise noted.